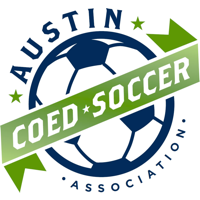 
Mission & Vision: Austin Coed Soccer Association is committed to providing a safe, organized and FUN environment where everyone feels welcome and celebrated, and a part of a great and growing soccer community. Through the strength of our community, we are actively working towards a better Austin where everyone thrives.

Over 2,000 adults representing a bright kaleidoscope of diversity, with skill levels ranging from expert to beginner, join us on Saturdays for 90 minutes of full field IFAB rules coed soccer at 2 locations in the Austin area–Onion Creek Soccer Complex and Northeast Metro Park. Our players have affectionately dubbed us a “Festival of Soccer.

Soccer is an amazing physical, mental and social exercise. Get your heart pumpin, steps up, meet amazing new people, process stress, and have fun.

Celebrating over 30 years: Legend says that coed teams started playing pick-up matches at Murchison Middle School in the mid-80's, and by 1988 the earliest version of the coed league was formed. Matches in the first few years were held at Robert E. Lee Park, Martin Middle School and Zilker. In 2002, the league was granted 501c4 non-profit status and the name was officially changed to Austin Coed Soccer Association. We are proud to partners and supporters of Austin Men’s Soccer Association, Austin Women’s Soccer League, Austin Soccer Foundation, FC Austin Elite Women’s Soccer Club, and Equality Texas.

This registration is closed

There are errors in your form

Please correct the following errors on your form then re-submit

We are making some updates to our payment functionality. Please check back 12/1.